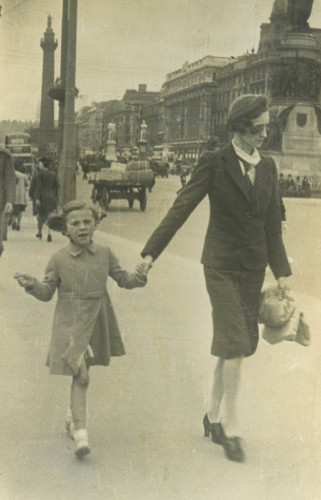 “This is the only photograph I have of myself (Shirley Redmond) from my stay in Ireland during WW2. I was evacuated with my brother JohnnyBoy (John Redmond) in 1939. My father was a doctor from Wexford (Aidan Redmond) who had moved to England and set up a medical practice in London. When war broke out and he joined the RAF as a doctor he sent us to stay with his brother (John Redmond) and his wife, my Auntie Shelia. In the photograph I look very happy skipping alongside by Aunt. I think we had been on a shopping trip and I think it was spring. I remember Nelson’s Pillar. We returned to England in 1941 and I must have been given this print to take with me.”